The Power of Promotion

The Bonnie J. Addario Lung Cancer Foundation (ALCF), established in 2006, has become one of the largest patient-founded, patient-focused, and patient-driven philanthropies devoted exclusively to eradicating lung cancer through research, early detection, education, and treatment. The Foundation’s goal is to work with a diverse group of physicians, organizations, industry partners, individuals, patients, survivors, and their families to identify solutions and make timely and meaningful change, and turn lung cancer into a chronically managed disease by 2023. 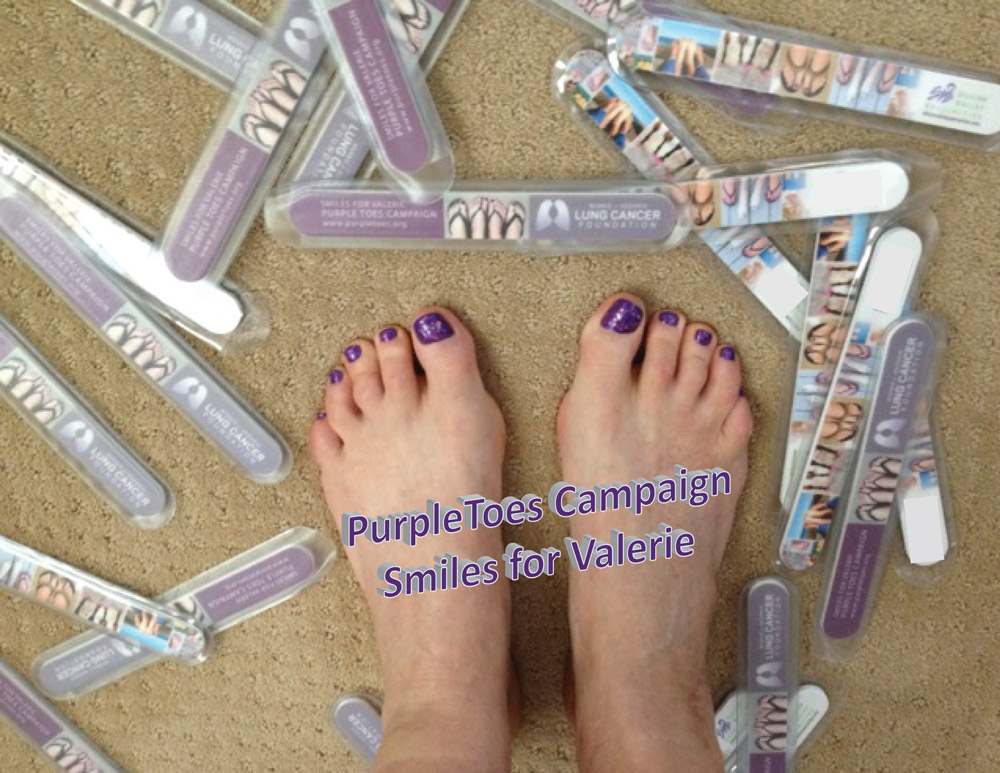 “From the moment we first heard about the Purple Toes campaign we recognized that people of all ages and genders could participate. Our biggest surprise was not the national media attention, it was the power of what one single nail file and bottle of purple nail polish could do.”

The Power of Purple

In 2013 Susan created the Purple Toes Campaign, Smiles for Val, with the ALCF to spread awareness about the facts and statistics of lung cancer-long stigmatized as a “smoker’s disease” –by sharing her friend Val’s journey.  This project was particularly important because Val was a non-smoker with Stage 4 lung cancer.  After her diagnosis, Val’s husband wanted to lift her spirits. So he took her for a pedicure. As Val was getting her toes painted in her favorite color – purple, her husband thought he might get a smile out of Val if he painted his nails purple too. It worked! A simple request from her husband resulted in friends sending Val photos of their own purple toes.

Susan’s objective was to build on that simple gesture and make it bigger.

This campaign, though it may have started small, reached tens of thousands of people worldwide, raising more than $15,000 for research, patient programs/services, and increasing awareness of ALCF’s efforts to support patients, families and caregivers.

The campaign was simple: Those who donated $25 or more received a bottle of OPI Purple with a Purpose nail lacquer and a customized nail file branded with purple toes photos. Then they painted their toes with the purple polish and posted a photo of their purple toes for Val on social media.

Susan did all the legwork for the campaign, working with OPI to donate the polish, while she donated the nail files, created the artwork with the campaign information, and created the polish kit to send to donors. The cost to ALCF was minimal and the returns immeasurable. “One cannot measure the joy this campaign brings to patient lives and awareness for the disease,” explains Addario. “The symbolic nail file brings lung cancer awareness, in itself, to the entire community. In terms of actual dollars, the campaign has raised more than $15,000 to date! In terms of exposure, it has surpassed our hopes and expectations..”

The campaign received local, national, and international coverage through both traditional and social media. Susan shares, “We took full advantage of social media, and our hashtag, #PurpleToes, started to trend on Facebook, Twitter, Instragram, and Pinterest.” She wrote two posts featured on BlogHer and arranged for NBC Bay Area Proud to air the story, which was picked up by CNN, Huffington Post, and numerous regional and international sites.”

For her work on this campaign, Susan received a PPAI Bronze Pyramid Award from the Promotional Products Association International (PPAI), which recognizes excellence in promotional marketing and is considered one of the highest industry honors.

Tell us your project details and let's start creating!

Start Your Project
We use cookies on our website to give you the most relevant experience by remembering your preferences and repeat visits. By clicking “Accept”, you consent to the use of ALL the cookies.
Cookie settingsACCEPT
Manage consent

This website uses cookies to improve your experience while you navigate through the website. Out of these, the cookies that are categorized as necessary are stored on your browser as they are essential for the working of basic functionalities of the website. We also use third-party cookies that help us analyze and understand how you use this website. These cookies will be stored in your browser only with your consent. You also have the option to opt-out of these cookies. But opting out of some of these cookies may affect your browsing experience.
Necessary Always Enabled
Necessary cookies are absolutely essential for the website to function properly. These cookies ensure basic functionalities and security features of the website, anonymously.
Functional
Functional cookies help to perform certain functionalities like sharing the content of the website on social media platforms, collect feedbacks, and other third-party features.
Performance
Performance cookies are used to understand and analyze the key performance indexes of the website which helps in delivering a better user experience for the visitors.
Analytics
Analytical cookies are used to understand how visitors interact with the website. These cookies help provide information on metrics the number of visitors, bounce rate, traffic source, etc.
Advertisement
Advertisement cookies are used to provide visitors with relevant ads and marketing campaigns. These cookies track visitors across websites and collect information to provide customized ads.
Others
Other uncategorized cookies are those that are being analyzed and have not been classified into a category as yet.
SAVE & ACCEPT